It’s very humbling and actually somewhat embarrassing to have an article about me titled the way this one is (see below), but at the request of my “advisors” and friends, I have decided to re-print the article here.

ParentDish, owned by AOL, ran 24 articles on Father’s Day titled “Amazing Dads” (there’s the embarrassing part!). I was honored to be one of the 24 for the creation of AllergyEats to benefit our community.

The main reason to post a blog entry about this article is due to the effects it has had on our site. Given the reach and popularity of AOL, the article has caused a huge surge in traffic, members, Facebook friends, and most importantly, ratings! This explosion in ratings has dramatically improved the value of AllergyEats for our entire food allergy and intolerance community.

So thank you for your participation in AllergyEats and for making this site the powerful resource it has become in many geographies and will become in others. While I got the credit on AOL for creating AllergyEats, you the users deserve the credit for giving the site its value and constantly-increasing credibility. Thank you.

(I would like to point out an error in the article. The part that states “AllergyEats, an online guide that lists 600,000 allergy-friendly restaurants nationwide” is inaccurate.  What the article should have said is that the guide lists well over 600,000 restaurants that users can rate for their allergy-friendliness.) 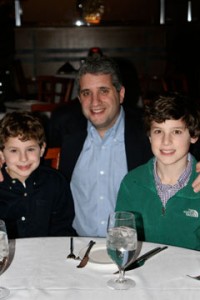 Amazing Dad: Paul Antico, founder of AllergyEats, an online guide to more than 600,000 allergy-friendly restaurants in the United States

Why Paul Is Amazing: If necessity is the mother of invention, perhaps frustration is the father of website creation. Paul Antico’s inspiration for AllergyEats, an online guide that lists 600,000 allergy-friendly restaurants nationwide, was born out of a two-hour episode in which he was driving around Boston trying to find a restaurant that his two sons, both of whom have severe food allergies, could eat at with little or no risk.

That was four years ago, a time in which Paul’s wife was the one who knew the most about all things food-allergy-related. Because she was out of town the night of the incident, Paul struggled to find a suitable eatery. Throughout the prolonged search he kept saying, “I wish there was a guide, I wish there was a guide.”

And it wasn’t just a local problem. Over time, Paul also discovered that dining out on family vacations was just as difficult, if not more so.

“I thought, ‘Wouldn’t it be nice when you go to a travel destination to immediately know where the places are that we’d have a better chance of having a comfortable experience?'” Paul recalls.

Since nothing existed, he decided to create the guide himself. Serendipitously, about a week after he began the arduous task of figuring out exactly how to create such a guide, he met the executive director of the New England Chapter for the Asthma and Allergy Foundation of America (AAFA). The timing couldn’t have been more ideal. He had the idea, the passion, the energy and the drive, but he didn’t have a model or a connection in the field. She went on to become Paul’s mentor of sorts, offering advice and support throughout the process. He has since joined the board of her organization.

That process, which entailed, “Putting the idea together, getting consultations, hiring developers and figuring out where to get the data of all the restaurants,” took him 20 months. “When I first started out, I thought I was going to do the development on my own and soon realized I was so far out of my league it was ridiculous,” says Paul.

AllergyEats launched in February of this year and is slowly but surely building traffic and amassing reviews. It’s a peer-rated guide, so Paul is counting on people with food allergies to go out and rate restaurants in their own cities and neighboring towns. And because the devoted dad lives in a suburb of Boston, that area has the most robust reviews, but other cities like Rockford, Illinois and Charlotte, North Carolina, have also sprung to life in the past few months.

The bonus? Every night Tucker goes into Paul’s study and says, “Dad, can we check the stats?”

“He likes to see how many new ratings are in, how many new members we have, particularly when we go over to look at the page views, the new unique visitors and where they come from geographically and … if they were referred,” says Paul. “He loves watching it. He’s a real statistics nut like me.”

Paul’s Son Tucker Says: “My dad is willing to do a lot of things for us. And he makes lots of sacrifices. In the winter I have hockey games early in the morning and they’re far — sometimes an hour away — and he wakes up early to drive me there. He coaches my baseball and hockey teams and in the winter he builds an ice rink outside for us to play on. On vacations, he goes on rides with us if we’re scared. And he always double checks labels for me and Keegan and talks to the chef to make sure the food is 100 percent safe for us to eat.”

Recognition: AllergyEats has been endorsed by the Massachusetts Restaurant Association and the Asthma and Allergy Foundation of America (AAFA). It was also an Editor’s Pick on Best Allergy Sites.

Paul’s Guilty Pleasures: “My guiltiest pleasure by far is I’m a fantasy hockey freak. I’ve been the commissioner of a league that started out with just former work colleagues about 12 years ago and it’s become a real hyper-competitive league. There’s no money involved but boy, the pride on the line, you can’t put a price on that. And by the way, I happened to win this year, after an 11-year drought.”

Paul’s Best Advice: “Take time during the development phase to make sure you get it right. Think about how the user will react to it. When I’m looking for feedback I don’t want to hear how great it is; I’m really looking for the criticism. A lot of people are reluctant because I’ve taken a lot of time to build it, but the site was really built on a lot of constructive criticism. I knew what the ultimate goal was and I stayed true to that, but the path to get there adjusted a little bit as people had better ideas than I did. There’s no way one person has the monopoly on great ideas. Plan far in advance, find some experts and incorporate their opinions.”

Hi Paul, you’re great, your family is so lucky to have you. Thanks for the info on retaurants. Your work is greatly appreciated!
Ginny