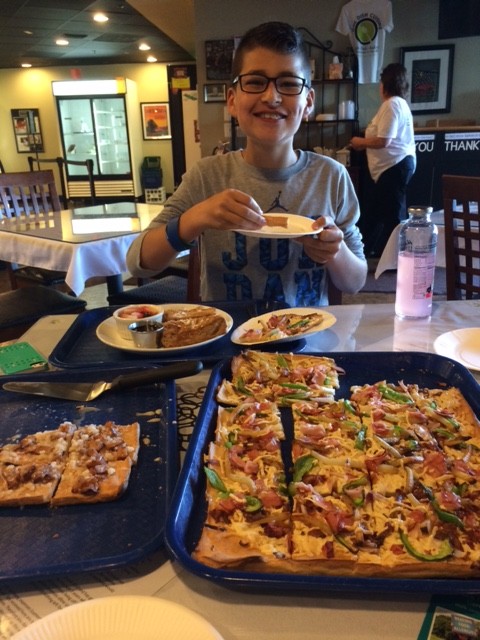 In researching our most recent blog post, “The Most Allergy-Friendly Restaurant in America,” we scoured many comments and stories from guests of One Dish Cuisine (the winner of that esteemed title), based in Ellicott City, MD.

One story, however, left us speechless.

This was the story of Max, an amazing 13-year-old boy from Rochester, NY who is allergic to wheat, dairy, eggs, barley, rye, oats, peanuts, tree nuts, and sesame. (Fortunately, he outgrew a coconut allergy.)

He also lives with mild cerebral palsy. Max is one of two children, along with his 16-year-old sister Abby, to mom and dad, JoAnne and Steve.

JoAnne and I set up a call to discuss their family experiences at One Dish Cuisine. I was immediately intrigued by the fact that the entire family participated on the call. They all wanted to share their enthusiasm for how One Dish Cuisine and its owner, Maureen Burke, has positively affected their lives and their family.

Typically, Max’s family feels it is too risky for him to eat food made outside of their home (especially after an anaphylactic event last year) and they are uncomfortable by the awkward looks on the faces of restaurant staff when they explain all of Max’s allergies. Until now, they were only willing to go to Red Robin occasionally (where Max is limited to a lettuce-wrapped burger and fries) or Disney World (an expensive restaurant visit!). The frustration, however, is that they do want to eat out more often, but the fear of cross-contamination, in particular, is daunting to them.

In early 2015, JoAnne found One Dish Cuisine during one of Abby’s soccer tournaments. “I showed Max the One Dish website. It was such a foreign concept that we could walk in and he could order off the menu – anything he wanted. We wondered if it was for real,” said Joanne. They had to try.

Max described his initial encounter at the restaurant: “When we arrived at One Dish, we told Maureen we were new to One Dish Cuisine and have food allergies, and asked if it is true that I can eat here. Maureen said I could eat anything off the blue menu. I was about to cry.

“It was really exciting. I could have anything. I felt like a normal person. It was really, really heartwarming – it made me feel great and I was happy. I was in Heaven. I gained 8 pounds that day. I was eating something and the guy next to me was eating the exact same thing. It was so cool to be eating what other, normal people were eating. It was strange to see because that never happens.”

Over the course of a few visits that weekend, Max tried as many foods as he could – sausage, pizza (many different kinds), a hamburger, French fries, French toast, donuts, soft pretzels, a club sandwich, pasta, a chef salad, and even REAL birthday cake! 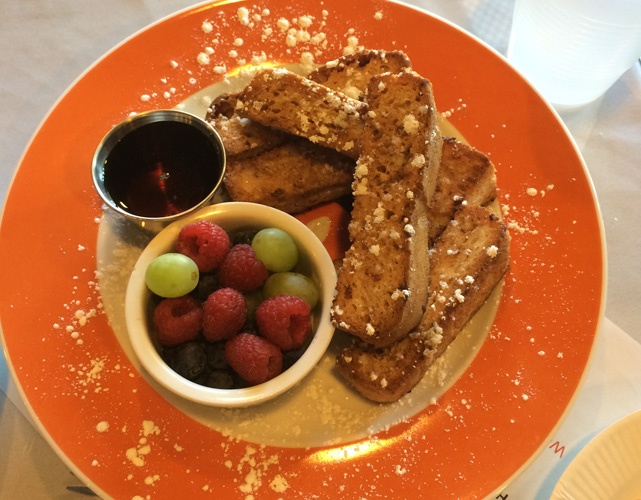 JoAnne shared, “I remember physically shaking. You know when you hold a baby and you rock back and forth? I was rocking back and forth. I was overcome by emotion – I was scared, I was excited. You live with fear all the time – the realization that you may need an EpiPen to save your son’s life. It was so surreal that Max could have anything on the menu.”

Steve commented not just on how well owner Maureen Burke accommodated his family, but on how tasty the food was for those without allergies (including himself, his wife and daughter, and two family friends), who are used to eating anywhere they want. “She really knows her stuff on the allergy side, but on top of that, she’s also a good baker and a great chef. That really makes a difference.”

Abby also enthusiastically shared her thoughts. “It was amazing. Everything happens for a reason and it was great that my soccer tournament led us to One Dish Cuisine, which was such a life changing experience for my brother.”

Suffice it to say that this first experience had Max’s family hooked. They left that day with a bunch of frozen pizzas to bring home. Max “burned through those” in no time. Now, they take every opportunity they can to not only revisit One Dish Cuisine (344 miles from their home in Rochester, NY), but to stock up on as much of Maureen’s food as they can fit in the car for later enjoyment. The family even planned Max’s 13th birthday party around events in Baltimore so they could eat all of their meals at One Dish Cuisine! 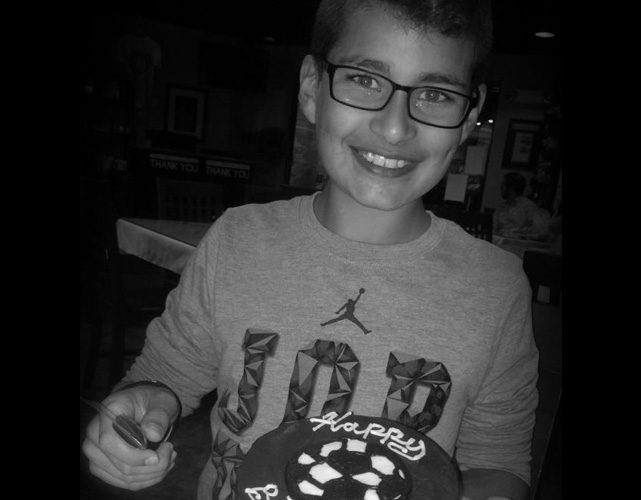 Both sides have gone to great lengths in order to get One Dish Cuisine food to Max.

On the family’s side, not only do they take home as much as possible with each visit, but they’ve found creative ways to get Maureen’s food from Ellicott City, MD to Rochester, NY. Recently, when local friends had to travel to Baltimore for an appointment, JoAnne asked if they’d be willing to stop at One Dish Cuisine on their way home. When the friends picked up the order, Maureen had prepared so much food that they needed to go out and buy another cooler to transport it all home! Maureen also agreed to bring food to Steve and Max’s hotel during Max’s recent 8th grade trip to Washington, DC, so that Max will be able to eat restaurant food like all of his friends.

I asked Max what his thoughts are now that he’s visited One Dish Cuisine numerous times. “I’m always nervous when I step into any restaurant. Even Disney World can mess up. There’s always a 1% chance that something bad will happen – except when I go to One Dish Cuisine. I don’t have to worry there. I trust them with my life. I trust One Dish Cuisine more than Disney World. I miss them. I wish they had one in Rochester!”

JoAnne corroborated Max’s comparison by sharing some problems they have had at Disney World with all of Max’s allergies. “We don’t have that worry with Maureen.”

“A lot of kids want to go to Disney World. There are rides and everything, and it’s so wonderful. But One Dish IS my Disney World!,” Max exclaimed.

That was the phrase that resonated with me the most. Max is a bright, articulate, passionate young man to speak to, and when he said those words, he spoke with power in his voice.

Eating at One Dish Cuisine has been a game changer for Max, as Maureen has introduced him to foods that he’s never been able to try before.

“He’s not a picky eater,” explained JoAnne, “and he doesn’t just eat chicken nuggets. Instead, he enjoys a variety of good foods and has a sophisticated palate. I wish more restaurants could really, truly accommodate him like One Dish Cuisine.”

“I love all the food at One Dish Cuisine – the burgers, bread, meatball subs, and pasta. Her [Maureen’s] pizzas are the best I’ve ever had,” Max declared enthusiastically, adding, “I’ve never had really good birthday cake in my life before Maureen made my cake for my birthday last year. It was so delicious. I’m in Heaven when we go there.”

I asked Max if he preferred One Dish Cuisine’s food over his mother’s and… well, let me not finish that sentence. I really like JoAnne and the family.

JoAnne finished our conversation with her consistent positive outlook. “The look on his face when he can eat anything is priceless. As Abby said, everything happens for a reason, and it’s so wonderful that the soccer tournament opened up this whole new world for us.”

“Going to One Dish Cuisine is so very different [than going to other restaurants],” JoAnne continued. “There’s no fear, no holding your breath, no heart racing. When we’re there, eating as a family, it is pure joy! To be able to give my son that precious experience that so many others get to enjoy every day is truly a gift. What Maureen has created is a safe, welcoming, and inspiring environment like no other… and we are forever grateful.”

“I want Max to feel comfortable in who he is and what he was given,” JoAnne added. “We all have challenges. We can’t lead a negative life. We need to be happy with what we have.”

This is awesome! I so wish we had a restaurant like this near me. Even though I could not eat many of the foods Max ate, I believe that there are others here who would be grateful and would pay for a restaurant like this, especially if it had gluten, dairy, soy, grain-free options and the ability to customize veggies, etc. being organic, using grass-fed meats and organic, antibiotic-free chicken would be everything! Great job!

I love this story! We were fortunate enough to visit One Dish for the second time on our way home from D.C. (we live near Philadelphia). I agree that it’s better than Disney World restaurants!! We feel 100% safe having our son with multiple food allergies eat there. Thanks Maureen!

Amazing Mo! Your love is carried through in the service, the food & the conversations you have with your friends/customers who visit One Dish. You offer our children ( & parents) a place to feel free and normal to enjoy the pleasure of food in a safe & friendly home -like environment. We are so fortunate to have you close & and are grateful for all that you do for our community! ❤️

Whoever came up with the idea to make such delicious food with no allergens is incredible.The fact that someone thought about other people in this world is nice to see.The creator of the Cuisine is the definition of a true heroe,not someone that walks around like a hypocrite trying to force people into their own religious beliefs.