EpiPen US supply sporadic, but not a formal shortage… yet? 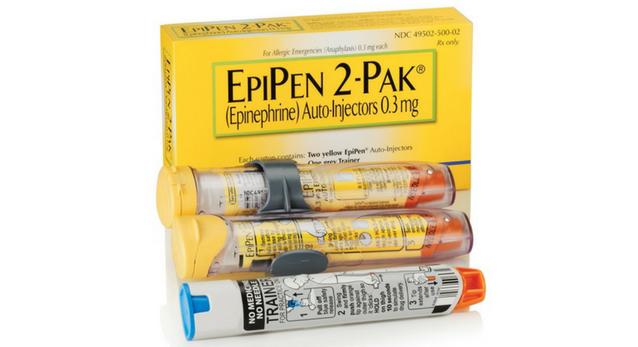 individuals not being able to procure EpiPens at their local drug stores.  There didn’t seem to be a pattern – various drug stores, various states, both branded and generic EpiPens – but it was soon clear that these weren’t isolated incidents.

Patients were legitimately having problems acquiring the most widely-used epinephrine auto-injector in the US – and they were concerned.

Other leading voices in our community, most notably Allergic Living and Snack Safely, were receiving the same news and published articles about it.  (Darn that family vacation for allowing me to get scooped!)  Calls and emails to Mylan and the manufacturer of EpiPens (Meridian Medical Technologies, a subsidiary of Pfizer) have led all of us to the same “official” canned response from Pfizer:

“We are currently shipping product; however, supplies may vary from pharmacy to pharmacy. The FDA has not announced a shortage in the U.S.

We understand how important this potentially life-saving product is to patients, and we are working closely with Mylan to monitor supply levels so patients have access to epinephrine auto injector products.”

Hearing It For Ourselves

Enough of these corporate responses; it was time to call customer service as an average everyday customer.  The response I got was interesting.  There were “intermittent supply constraints.”  The company “can’t fulfill all demand.”  This is “not specific to any region or state” and it “depends on the supplying wholesaler.” Lastly, the simple fact was that they “can’t keep up with demand; it is not a quality issue.”

Seeking to confirm, a colleague called a little later in the day with interesting results.  Call #1: After asking when she could get EpiPens in her market, she was put on hold for 8-9 min and then disconnected without a response.  Call #2: Immediately disconnected upon asking (different customer service rep from call #1).  A little later, call #3: Immediately to voicemail!

All of this alone is enough to be concerning.  However, a deeper look makes it even more so.

Reading Between the Lines

First, though, kudos to our friend Dave Bloom at Snack Safely, who pointed out something I didn’t know when he said “we are avoiding using the term ‘shortage’ because it is an official designation that the US Food and Drug Administration (FDA) uses.”  And as we know from the official Pfizer statement, there is no declared shortage (yet?) from the FDA.  Interestingly, our friends at Allergic Living pointed out that the FDA told them that “its supply information is coming from [Pfizer].”  Anyone else see the paradox?

So let’s parse a few things out:

As I often do, I’m going to jump back into my old job as financial analyst.  I interviewed tens of thousands of senior company executives over 17 years and was, amongst other things, trained in perceiving “deceptive or misleading statements.”

Using those skills, the official Pfizer statement is telling.  Here is the first part of their statement again: “We are currently shipping product; however, supplies may vary from pharmacy to pharmacy. The FDA has not announced a shortage in the U.S.”  Note the change from “We” to “The FDA.”  Now, if you were at Pfizer and there wasn’t a shortage, would you say it this way?  Of course not.  You would say “We do not anticipate a shortage” or “We have not announced a shortage.”  Putting it off on the FDA is one way of avoiding answering the question.  The second interesting piece to me: the FDA “has not announced a shortage.”  Read this closely.  It very deliberately doesn’t say there isn’t a shortage, as one would say if they were certain there wasn’t; it says no one has “announced” a shortage.  That’s a big difference.

Am I reading too much into a brief statement?  Absolutely not.  Corporations are very careful about how they write these statements.  What this one is telling me is that Pfizer is concerned that there may in fact be an upcoming shortage, but they haven’t reached whatever threshold triggers that designation yet.

So let’s consider my call.  Simply put, they “can’t fulfill all demand” and “can’t keep up with demand.”  (My friends… that’s a shortage, despite official FDA designations.)  That second phrase, in particular, surprised me because I am unaware of a sudden surge in demand for EpiPens.  That doesn’t mean there isn’t one.  Is there a summer surge?  If so, that would seem to be an annual issue that the company would be prepared for.  So why would there be trouble keeping up with demand… especially given that market share has been taken by AUVI-Q and generic suppliers over the past 15 months?  It was interesting that the customer service rep said that there was “not a quality issue.”  I never asked.

Possible Causes of the Shortage?

That, then, reminded me of the FDA “warning letter” that was given late last year to Meridian Medical Technologies regarding faults in some EpiPen units and the company’s failure to properly investigate hundreds of complaints.  The FDA inspection that triggered the letter, according to the St. Louis Post-Dispatch (Meridian’s manufacturing facilities are located in the St. Louis area), detected that “a critical component” of the auto-injector product failed last year.  Meridian did, earlier in 2017, recall tens of thousands of devices after complaints that some failed to activate.  Could manufacturing problems be causing these current issues?  This is just stream of consciousness.  I have no evidence to make this claim.  But without transparency from the manufacturers, one is left to guess.

Lastly, as we reported a few months ago, EpiPens DID experience and ARE still experiencing supply problems in Canada, and very recently, the same was reported in the UK.  Could some US supply be being diverted to these markets?  Even if not, what is causing those shortages?  And doesn’t it stand to reason that there is a global issue affecting production?  The Canadian shortage has been going on for over 3 months now despite Pfizer’s claim at the time that “EpiPens would be unavailable in Canada for two weeks and then in limited supply thereafter.”  It was subsequently communicated that “thereafter” referred to February.  But late April?

So, at the end of the day, what do I make of all this?  I say that there is much more going on behind the scenes than we are being told and I would not at all be surprised to hear an announcement in the near-term about an “official” supply issue (i.e. shortage) in the US.

I requested a call with a Pfizer rep (after I was sent the generic company statement) in order to more clearly and transparently address this incredibly important issue.  My request was denied.

So what can you do?  If you are a staunch EpiPen user, I suggest you speak to multiple pharmacies in your area. As mentioned earlier, supplies are not specific to a region or supplier.  Second, if you are not married to the EpiPen, you can certainly pursue an alternative.  Remember that AUVI-Q devices are available to almost everyone at no cost (see details in the link). [Full disclosure: kaleo, maker of AUVI-Q, is an AllergyEats sponsor.] Lastly, you can pursue other generics.

I’m positive this story isn’t over.  I look forward to updating everyone with more details as they become available. Meanwhile, please share your experiences in the comments section below.

And once you’ve done that, please go to our home page where you can rate any restaurant you’ve dined at recently – or search for a new place to dine, thanks to the help of other food-allergic diners.  Each new rating you submit makes AllergyEats a more valuable resource for our entire food allergy community.

My immediate thought went to the laws of supply and demand. Prices can be increased if there is a demand. It’s not right and I’m not saying that anyone would do such a thing, but look at all the controversy in recent years regarding the prices of Epi-pen.

In the past few months the epipen my daughter has at home and the one we keep at school expired. When refilling the prescriptions within a month of each other we had to wait a few days both times because they didn’t have any in stock. One of the refills we received has an expiration date of September. When I asked for one with a longer expiration they said if they sent it back to the company I would probably get the same. In 15 years we’ve never had either of these problems, so it makes me think something is going on.