Take An Allergy-Friendly Bite Out of the Big Apple: Midtown/Times Square

Choosing the best place to dine in New York City can be overwhelming, so we’ve put together a list of allergy-friendly restaurants near some of the most popular attractions based on AllergyEats’ user reviews. In a series of 4 blogs, we’ll feature top-rated restaurants across different regions of Manhattan: Midtown/Times Square, Midtown South, Downtown/World Trade Center and Uptown. 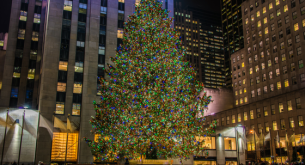 Recognized worldwide by its Christmas tree and iconic ice rink, no visit to New York City is complete without a trip to Rockefeller Center (Fifth and Sixth Avenues between 48th and 51st Streets). You can stroll over from “Rock Center” to two highly-rated steakhouses, Ruth’s Chris Steak House and Del Frisco’s Double Eagle (not to be confused with Del Frisco’s Grill), or take the family to American Girl. All of these restaurants are close to St. Patrick’s Cathedral (50th at Madison Avenue) and the Museum of Modern Art (6th Avenue and 53rd Street).

If you want to “be a part of it,” then put yourself in Times Square  (the intersection of Broadway and Seventh Avenue from 42nd to 47th Streets) by dining at either Blue Fin or Dos Caminos. Whether you opt for seafood or Mexican, both are in the W Hotel Times Square and run by a restaurant group that has a stellar reputation in the food allergy community, BR Guest Hospitality Group. Blue Fin and Dos Caminos are also good choices if you are seeing a show in the Theater District, as is Nizza, a restaurant that is not only allergy-friendly, but embraced gluten-free meal preparation long before it was more mainstream. Nizza, in the neighborhood known as Hell’s Kitchen, is also the closest allergy-friendly place to dine if you’re visiting the Intrepid Sea, Air & Space Museum (12th Avenue and 46th Street Pier 86).

If trying new restaurants is out of your comfort zone, there’s a Chipotle Mexican Grill just 3 blocks from Bryant Park (41 West 40th Street between 5th and 6th Avenues), whose seasonal skating rink is a free alternative to the one at Rockefeller Center. 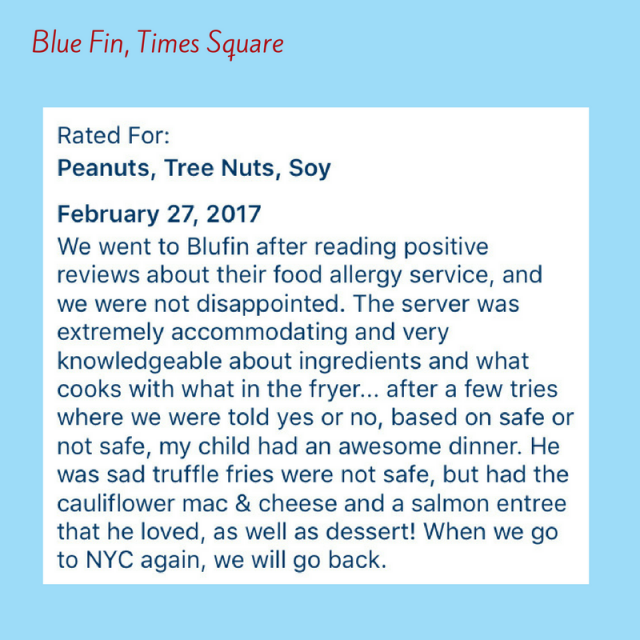 After all the sightseeing, you can reward yourself with an allergy-friendly dessert by walking up to 55th Street and First Avenue to A La Mode. We continuously read rave reviews about their ice cream, free-from nuts, eggs and sesame. While A La Mode is destination in itself, it’s also an easy walk from there to Fifth Avenue for window shopping and to see the Plaza Hotel (Fifth Avenue at Central Park South), whose luxury accommodations are featured in the Eloise children’s book series. What could be better for the allergy girl in your family than a night in Eloise’s suite, lunch at American Girl and dessert at A La Mode? 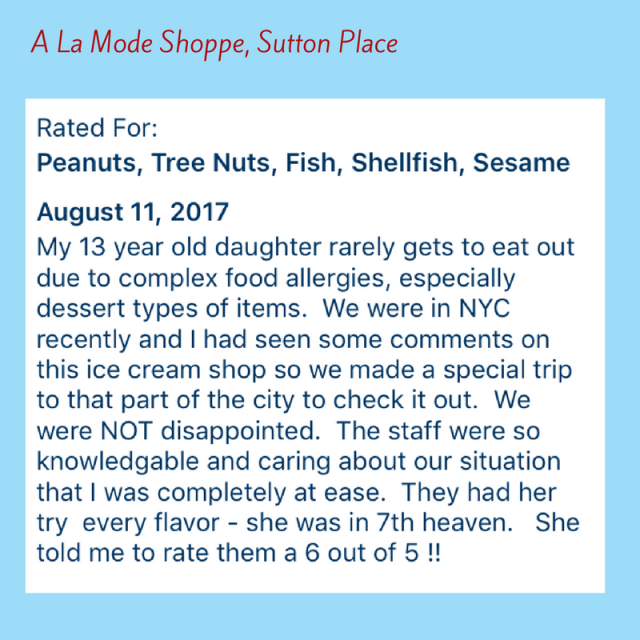 To avoid the crowds of Times Square, other top-rated choices in Midtown are Bistango at the Kimberly Hotel for Italian food or Dos Caminos‘ Third Avenue location for Mexican cuisine. One of AllergyEats’ team members chose to dine at Bistango after seeing Wicked and said that the mile-walk from the Gershwin Theater helped build up an appetite for a great allergy-friendly dinner! 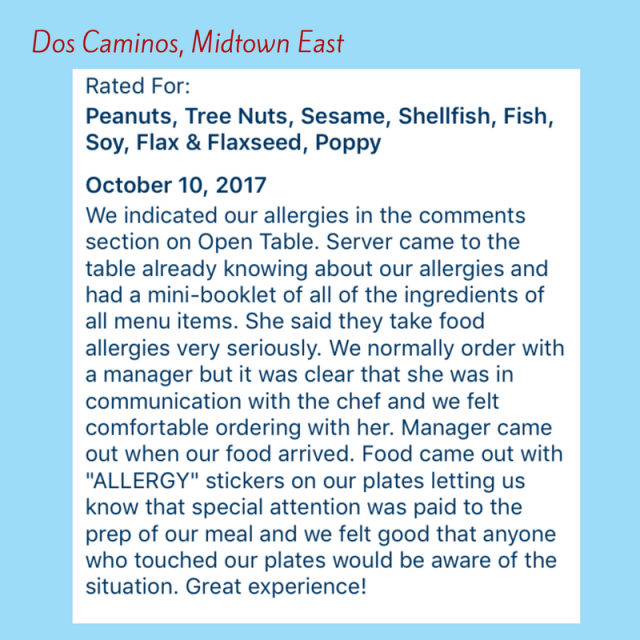 Not to be forgotten, particularly if you’re visiting the city over the holidays, is Herald Square (at the intersection of Broadway, Sixth Avenue and 34th Street), the final stop on the Macy’s Thanksgiving Day Parade route. Macy’s Department Store is popular for its festive window displays and massive Santaland.  Some of the restaurants listed in our food allergy restaurant guide for Midtown South (coming soon!) are closer to Herald Square than those highlighted in this blog, so if you’d like to dine in this specific area, consider Blue Smoke or Bistango’s second location.

We were there recently and ate at the Counter in Times Square. Excellent and good choices. Peanut and Gluten free for us

Not in midtown but soooooo worth the cab ride…. The Donut Pub is a peanut/treenut free donut shop in NYC.

Thanks for this helpful list. We will definitely reference it next time we venture into NYC! We actually had a positive experience at a restaurant near Rockefeller Center names Bill’s Bar and Burger – a perfect kid restaurant (atmosphere and quality of food might be close to a diner or Red Robin), and Santa even walked around to the tables. Here’s our recap of it if it helps anyone! http://www.mamacado.com/2015/12/a-food-allergy-friendly-trip-to-nyc.html