Take An Allergy-Friendly Bite Out of the Big Apple: Downtown/World Trade Center

This guide highlights restaurants below 14th Street. Notable landmarks include the 9/11 Memorial, Statue of Liberty, Wall Street and SoHo.

If the prospect of seeing celebrities in fashionable SoHo is part of your plans while in New York City, there’s a highly rated Dos Caminos in the midst of the neighborhood’s many art galleries and boutiques. The purveyor of Mexican cuisine has five locations in Manhattan, two of which are highlighted in our recent blog about dining out with food allergies in the Midtown/Times Square area, and this location is equally well-regarded with its 4.6 rating on AllergyEats.

Dos Caminos is also AllergyEats’ closest allergy-friendly restaurant to the 9/11 Memorial & Museum and the Statue of Liberty. 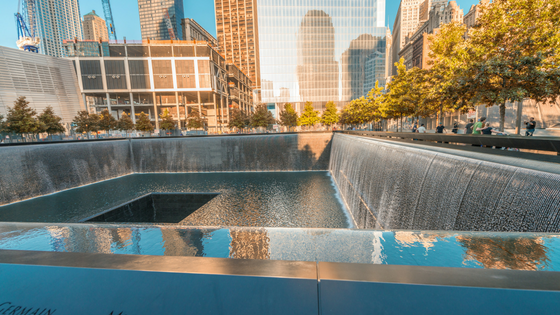 Many tourists choose to pay their respects to those fallen on 9/11 or take a boat to see Lady Liberty up close and should take into consideration that it’s about a 15 minute cab ride or a 45 minute walk from Battery Park, where the ferry departs for both Ellis and Liberty Islands, to Dos Caminos in SoHo. 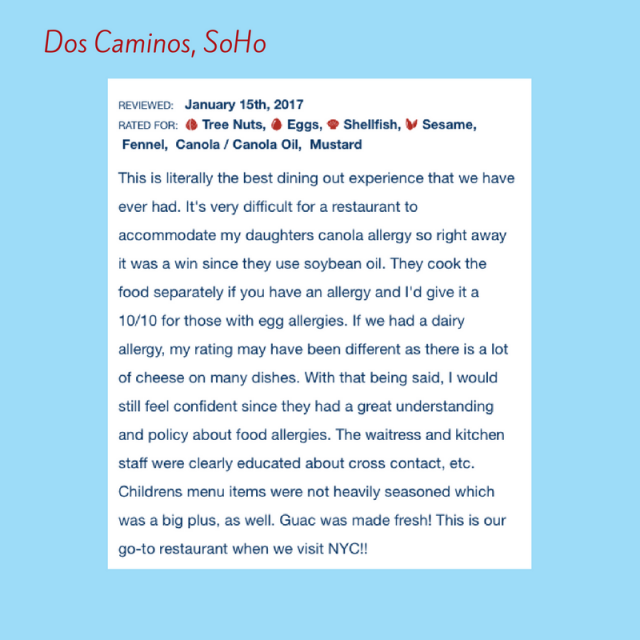 If you’re on the hunt for a sweet treat after touring lower Manhattan, two top-rated choices are  The Donut Pub on the west side and Erin McKenna’s Bakery on the east side. While those with peanut and tree nut allergies can be accommodated at both shops, we hear an occasional concern that Erin McKenna’s uses gluten-free flours processed on equipment that packages hazelnut, almond flours and soy, so the choice is dependent on your comfort level. Also note that the majority of The Donut Pub’s reviews on AllergyEats are from diners with tree nut and peanut allergies, who have rewarded it with a near-perfect rating of 4.9.  Fun Fact: The pub is open 24/7, so you can easily work it into your schedule, day or night! If you need to burn off some sugar after all those donuts, it’s just a 10 minute walk to one of the entrances to the High Line (Gansevoort and Washington Streets), a 1.45 mile scenic trail that runs along the west side of Manhattan. 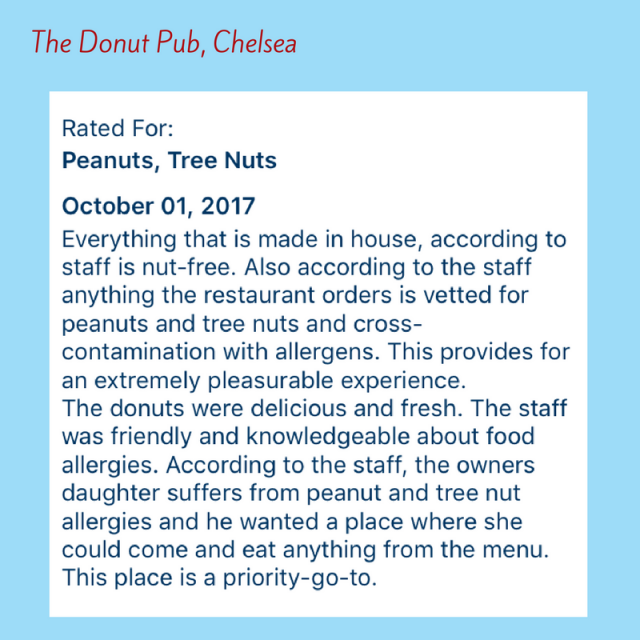 Rest assured, diners who are allergic to egg, dairy, soy and wheat can indulge at Erin McKenna’s entirely gluten-free and vegan bakery, which has a superb rating of 5.0 on AllergyEats!  The bakery (originally called Babycakes NYC) also has locations in Los Angeles and at Disney Springs Resort in Orlando and its shops are popular destinations for those in the food allergy community. After your visit to Erin McKenna’s Lower East Side location, another worthwhile destination is the Tenement Museum (103 Orchard Street), where visitors can book a tour to interact with guides who recreate immigrant life in the 19th and 20th centuries.

If you’re looking to eat lunch or dinner nearby, The Meatball Shop, one of seven in the city, is just a five minute walk from the museum. The restaurant’s menu is flexible, inviting guests to create their own meals by selecting a type of meatball, sauce and side dish, so food-allergic diners should feel comfortable that the restaurant is accustomed to making dishes based on the guest’s preferences. Of note, pesto is on the menu, the Chicken Balls are gluten-free & pork-free, and the Veggie Balls are vegan.

Alternatively, those who’d rather grab a bite to eat on their way back uptown can stop in the West Village at Otto Enoteca Pizzeria. Otto is owned by a restaurant group whose proprietors include celebrity chef Mario Batali and restaurateur Joe Bastianich, and despite its name, the menu extends beyond pizza, making a good choice for diners with a variety of allergies. Looking for one last photo op? The restaurant is just a two minute walk from one of the city’s most recognized landmarks, Washington Square Arch, located in the park on Fifth Avenue between MacDougal Street and University Place.