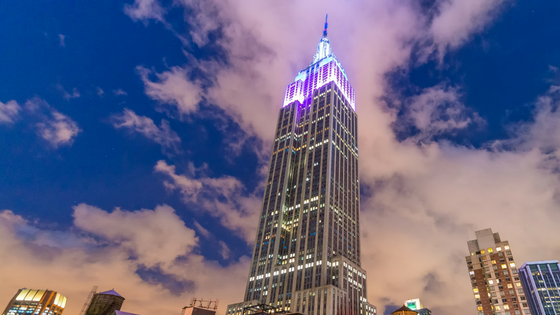 ‘Tis the season for classic films like Miracle on 34th Street, and if you’re lucky enough to visit New York City over the holidays, we imagine that a visit to the movie’s featured retailer, Macy’s in Herald Square (34th and 35th Streets at Seventh Avenue and Broadway), might be on your list of things to do.  After strolling by the store’s holiday windows, visiting its Santaland, or just seeing the site of the famous Thanksgiving Day Parade, you can venture over to two different allergy-friendly restaurants within minutes: Blue Smoke for upscale BBQ or Bistango for Italian cuisine. 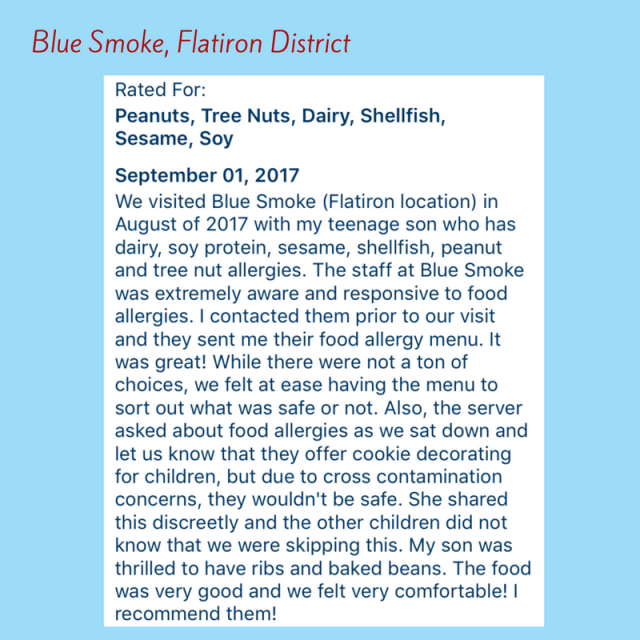 Both restaurants have been spotlighted before on the AllergyEats blog, based on our team’s personal experiences: Blue Smoke in NYC is Smokin’ Good with Food Allergies and Amazingly Easy Food Allergy Dining Experience in NYC. Bistango may sound familiar as its sister restaurant was recently mentioned as one of AllergyEats’ top-rated restaurants in the Times Square area. (Blue Smoke also has a second location, closer to downtown.) In case you are in need of a bite to eat before leaving the city on Amtrak, these restaurants are about a 10 to 15 minute cab ride to Pennsylvania Station (31st to 33rd Streets between Seventh and Eighth Avenues.)  Sports fans take note – Madison Square Garden, home to the New York Rangers and the New York Knicks, sits atop Penn Station.

While in this vicinity, be sure to walk along 34th Street to visit the Empire State Building (Fifth Avenue between 33rd and 34th Streets). To grab a treat after admiring the skyscraper, walk down Fifth Avenue or take a five minute cab ride to Chloe’s Soft Serve Fruit Co., whose flagship store is just down the block from Union Square Park. Chloe’s fruit pops and soft serve items are free of all the Top 8 allergens (but the shop does offer some toppings that contain gluten, dairy and nuts.) 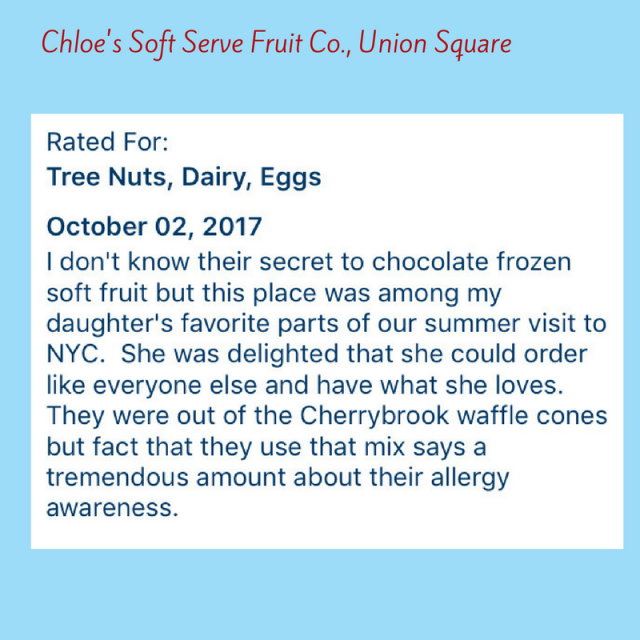 We recognize that so many food allergy articles these days focus on children with food allergies, and it’s important to point out that there’s a growing population of adults with food allergies, too! With that in mind, Del Posto is a good choice for food-allergic diners seeking upscale dining in New York City. The Relais & Chateaux recognized restaurant is known for its prix fixe menu, though a la carte options are available, and it discourages guests under the age of 6. Del Posto is just steps from the High Line if you’d like to capture some unique (dare we say, romantic?) views of the city from 30 feet above street level before or after dinner. Another fun stop in the area is Chelsea Market, largely an indoor food hall, but also a marketplace featuring locally made art, jewelry and other goods. All of this sounds like a great date, no matter what time of year, for the food-allergic adults in our community!

Was in the city this past weekend. We stayed at the Kimberly on 50th because of the Bistango! It was excellent! We also had breakfast there in the penthouse as well, very limited but I didn’t have an issue. My allergies are gluten dairy and tree nuts.
Another great find and spot was Toscano 49, excellent! super accommodating, great menu, gf pasta available as well.
I felt very safe…

I’m staying in NYC in 2 weeks Times Sq I have a garlic allergy any ideas??

I reached out to a few restaurants via email to ask if they could accommodate me I got nothing back!!